First of all, before KVCK, there was KGCX radio.  Here are three photos of KGCX when it was in the Westland Oil building.
Eddy Richmond and Esther, the two shown in the first photograph, are only identified by the name on the photo:

A recent photo of KVCK Radio:

KVCK Radio started up in 1957. I remember when Kenny Karge worked the “Platter Parade” program at 4 PM.  Kenny had a bicycle horn and he would squeeze it on the air and say “Karge at large”.  I remember Dick Applegren working at the station while I was growing up. Does anyone remember “Hovey-Stone Chevrolet time”?  I started working there in 1963, as soon as I got my 3rd class license, and gradually moved to full-time employment for Pete Coffey.  Here's a 1969 picture of the staff that I took:

Dennis is in Idaho.  Pete passed away March 18, 1972, and Bob passed away on April 14, 1986.  Benny is in Kalispell and Clare passed away in Billings March 4, 2015.  KVCK celebrated 50 years in business on September 1, 2007.  Thanks to the people at KVCK Radio, here is the last Editorial that Pete Coffey did.  The editorial runs 3 minutes, 15 seconds.  It was broadcast the week of March 13-17, 1972.  It last aired the day before Pete passed away:
CLICK HERE TO LISTEN TO THE EDITORIAL (Windows Media Format)
Here is an undated photo of Clare Hekkel, probably taken in the early '60s:

Here's a KVCK Radio photo taken in 1978. From left to right, employee Randy Dibble, Rex Allen, Jr., Me (badly needing a haircut), and employee Bobby Barlow:
In 1977 and 1978 KVCK was instrumental in bringing many country singers to Wolf Point and Poplar. Among them, Rex Allen, Jr., Bill Anderson, Leroy Van Dyke, Susan Raye, Cal Smith, Tommy Overstreet and David Houston. The concerts were either held at the Wolf Point Elks Club, or the Legion Club in Poplar. All of the concerts were sellouts. Not bad for a small town radio station! 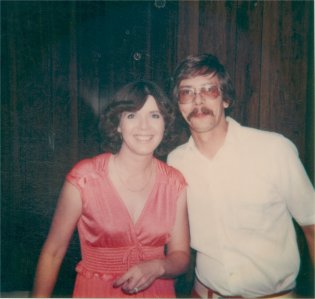 The Late David Houston appeared at the Elks Club in Wolf Point: Cal Smith appeared at the Legion Club in Poplar: Tommy Overstreet was at the Legion: Leroy Van Dyke, "The Auctioneer" at the Elks: One of the best concerts: Bill Anderson and the Po' Boys at the Elks:  (Thank God I've thrown out that white "leisure suit") 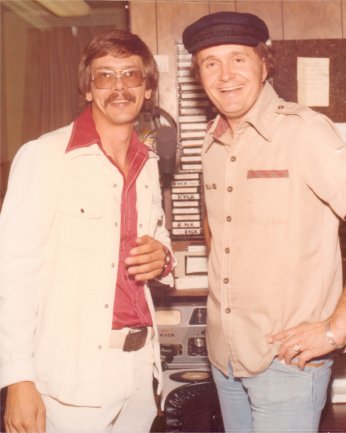 Ed Krebsbach started the first radio station, moving from Vida to Wolf Point.  Here is a photo of Ed: I was fortunate enough to purchase a 1923 World Atlas/Gazetter that was owned by Ed, on Ebay.